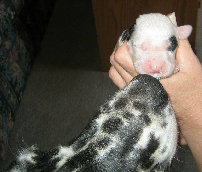 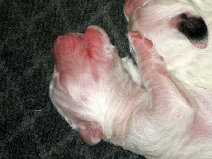 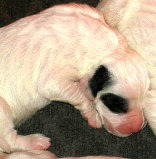 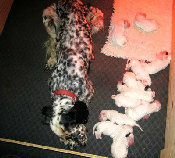 Sable and Zak's Puppies were whelped, April 16, 2010. Five white puppies, plus one boy all white with a black speck on his right ear-Beltons and one boy with black ear edges on his right ear, a boy with right sided eye patch and a left sided ear patch and patch on his neck right side, a little girl with black ears. All eight boys and three girls and their Mother are settled into the whelping box. All puppies are nursing well weighing in at birth between 11oz.-14 oz. Sable is doing wonderfully, resting and caring for her new litter.
Congratulations to The Snyder's and to Sable and Zak!

It will be interesting to see how they tick out, blues, oranges and tricolors--too early to tell right now but 6 puppies with definite black coloring. Their eyes are closed and their ear canals for the next two weeks. Check Back for photos as they Grow!
SNYDER'S UPLAND SABLE X ZAK DILLON'S PUPPIES APRIL 16, 2010
Newborn Girl
Newborn Boy

Day 4 for these little English Setters

Click To Enlarge Photo Features and Links
This repeat breeding and last litter for both Sable and Zak is expected to produce the same quality of hunting setters that their first litter did, hunting early, hunting well with stellar natural instincts.
Day 1
Day 4
More ES Pup Photos 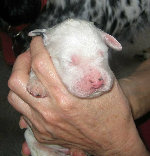