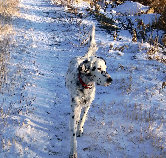 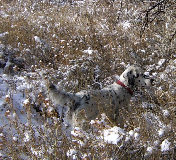 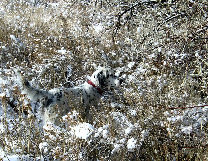 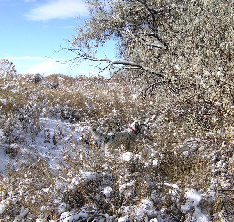 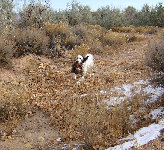 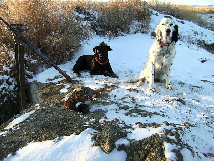 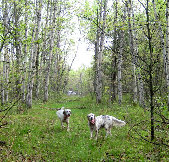 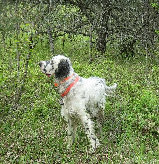 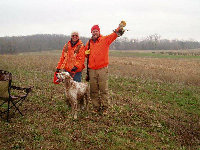 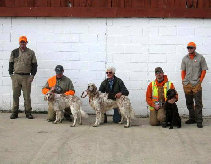 Libby and Zak
Zeb on the go
Hilda (with her Pink Bows)
Sister and Brother/Sable x Zak
"Good Job Son"
Lets Find the Birds
Time for Lunch/Time for a Break
Zeb
Father and Son
Winnie's First Grouse
Zak's GGGrandNiece
Above Photos: Woodcock Banding Season was great for getting out into the woods for both humans and dogs!
Sassy Pointing a hen: 45 seconds each of the three progressive photos
Ringneck --->
Sassy Holding a Ringneck Pheasant
Sassy Retrieving
Blackie Retrieving a Runner
Limit in 90 minutes
Smiling
Sassy Gliding down the Trail
"Sassy" a "Reba" and "Zak" Pup whelped Feb. 03, 2008 lives with "Blackie" and her "Dad" in Wyoming
Blackie and Sassy

"Sass moves up, can see the rooster a little better here, usually only hens hold that tight.
She has him pinned down - she is so close he is afraid to move and Sass is using the force to hold him, she won't move if he doesn't! Notice her right foot - looks just like an old time gun dog calendar point," quote from Sassy and Blackies Owner.
Ringneck --->
Ringneck --->
2011