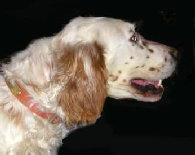 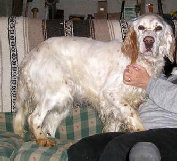 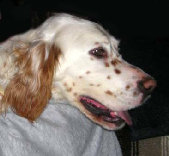 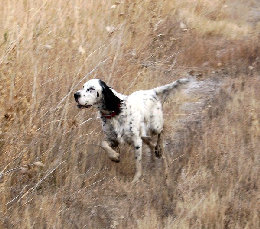 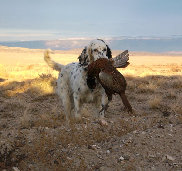 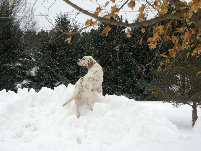 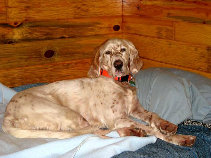 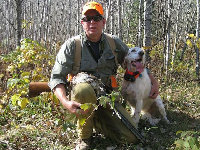 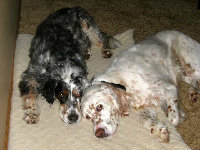 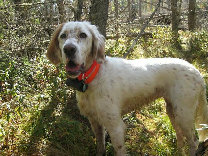 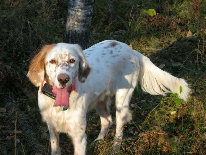 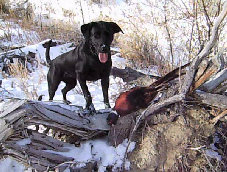 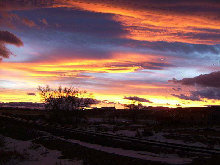 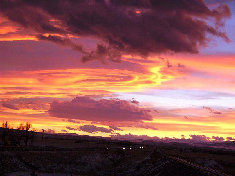 To Hunting Gallery XIV
CLASSIC ENGLISH SETTERS AFIELD
Hunting Collage XIII
"Blackie" a Pointing Lab and Zak's Daughter, "Sassy" are a great hunting pair, here they are on a late season hunt for Pheasants. They also hunt for Sharptail throughout the Wyoming Hunting Season

"Sass is doing very well, she found quite a few cripples that we would not have found otherwise (she simply has a better nose, no doubt about it). She also marks, points beautifully. Last day of season she made a beautiful point on a wild rooster," note from Sassy's Dad, Clay Mizer.

"This rooster was wingshot - barely could fly and hit the ground on a dead run about 90 yards away.
Blackie ran it down in short order - was a thing of beauty to behold. She marks very well. Rooster is still very much alive, just caught.
Both girls get hold of pheasant by the back so it can't spur them," Sassy and Blackie's Owner 02/01/2011
"Marcy has a great head and is a wonderful setter. Very affectionate and a fine hunting dog," quote from Marcy's Owner/Warren Sheckells/Pinecoble English Setters. Marcy has been bred to Pinecoble Talus with pups due late March/early April 2011.

"She's doing a fine job of finding and pointing, especially on Woodcock, still bumping the Grouse on occasion - hasn't mastered the grouse pinning moves fully yet and I didn't help with field time last fall. She's a sweetheart no matter what." quote from Callie's Dad/Dale E.
"Callie" n Dad/Dale
"Callie" n Dad/Dale
Beautiful Callie after the Hunt
Callie in the Snowbank
Shadow n Callie
Callie/Hunting Trip October 2010/Upper Peninsula
Tamarack Reba x Zak Puppies 02/03/2008
Marcy has been bred to Pinecoble Talus/Pups Due late March 2011
"Sophie" n "Luther
"Sophie" On Point
"Sophie"
"Sophie" n Her Dad in the Grouse Woods Late Fall 2010
Bird Ahead
"Shadow" n "Callie"
"Sophie"
"Sophie" Retrieving
"Sophie" and Family
Tamarack Reba x Zak 02/03/2008
"Sophie got to hunt a lot this Fall. It was a concentrated training year for her and she matured immensely. Her range is good, she is listening and hunting for me, she is learning to use the wind, work running grouse, hunts dead well and I have not been able to wear her out even in warm weather," quote from Sophie's Dad, Roger M.
Field Work
LaBelle's Tamarack Sassy Blue