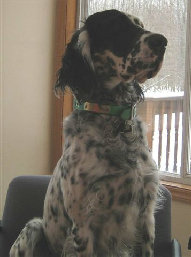 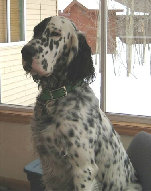 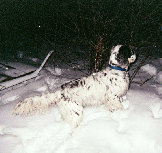 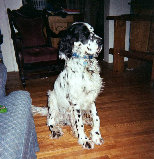 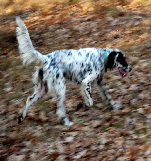 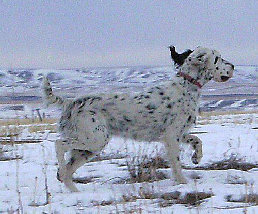 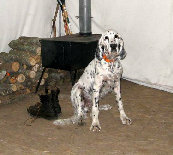 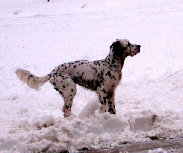 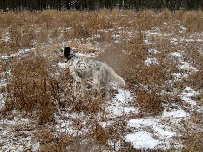 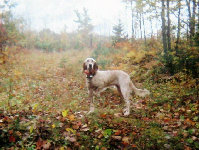 Poet's Wildacres Zoe
Wildacres Sweet Lady Elle/Zoe x Zak 2007
Elle (Zoe x Zak 2007) Zoe/02/23/10
Tamarack Sassy Blue: Reba x Zak 02/03/2008
This particular day it is overcast, cold and wind blowing about 40 mph+ (blowing her ears back). Black and white dog with a black and white background - she has a classic beautiful head and muzzle.
Sass is a gentle sweetheart, smart as a whip, and has probably a better nose than Blackie. Opening day of pheasant this year I was
hunting with my regular hunting partner; he dropped a rooster in some thick cover along a canal road. I told him prior to going that Sass was turning into a hell of a bird dog in her own right and he would be surprised how well she was doing. Blackie and Sass and his dog bailed into the cover; after a few minutes he said apparently was a wingshot runner as none of the dogs had yet. Then he looked up out of the corner of his eye and said "well there goes the rooster" - it just ran across the canal road 60 or 70 yards away. I looked up - there is Sass right behind it (not the other dogs). That's my girl! Second day she caught a cripple Blackie was having trouble finding. Did well all season.
Of course she is spoiled rotten. I couldn't be any more thrilled with the way she has turned out!!!! Also - she is spitting image of her Dad!
Huntin' Sharptails/Wyoming
Received March 01, 2010/Sassy's Owner