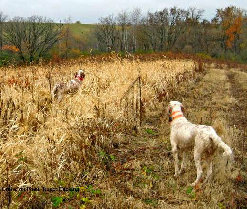 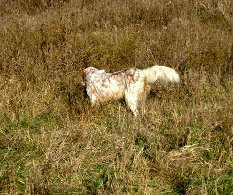 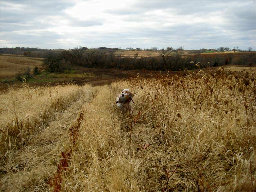 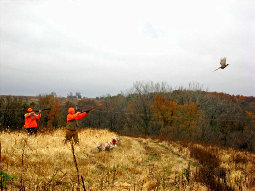 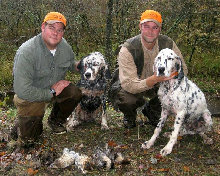 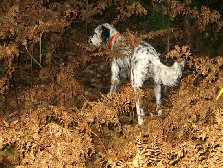 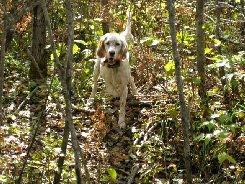 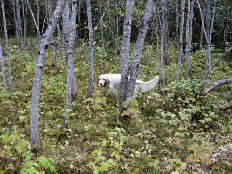 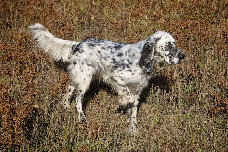 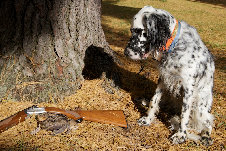 Zak September 01, 2009
Afield
Bracken Backing
Zak Backing Libby
Watching for the Bird
Bracken n Libby Watering Up
Buffy Resting
Grouse Season opened September 15, 2009 and it has been hot and dry decreasing scenting opportunities for even the older setters. Still hearts delight just being out in the woods, finally getting to work the dogs and get off a shot over them. Only one Grouse Opening Day in a usually prolific area on Michigan State Land. The hunt is on!
September 16, 2009
Oh! The Fall Color on the Trail
Oh! The Flag
Oh! To Be Afield
Oh! The Joy
Oh! The Happiness
Oh-Oh-Oh-Oh-Oh Series/09/30/2009
Belle Watching
Sable x Zak 01/24/2009
Belle, the pup, practicing her point
9 months old
Belle's first wild bird

"OK, it's hunting season and Callie is doing great. Hunting hard, pointing hard and finding birds. Bumping a few grouse as she learns to pin down the runners but a joy to have in the field. We just returned from 5 days in the western UP, I wouldn't say the birds were up but we moved 12-18 grouse a day, killed a few and left many for seed.
Here are a couple of pictures of Callie doing what she does best.
I have been really pleased with Callie this fall - wonderful companion in the field and doing an awesome job on the birds (especially woodcock)." From Callie's Owner/10/14/2009

Callie-Reba x Zak whelped Feb. 03, 2008
" Belle pointed the first wild bird I've been able to take. Not only that, but she located the dead bird in very heavy cover after I'd nearly given up finding it. What a good dog." From Belle's Owner 10/13/2009

Click To Enlarge Photo Features and Links
Yukon on a Woodcock
The Brothers,their Grouse and their Setters:Quincy & Yukon
"This past weekend our "resident" woodcock seemed to have moved out, and the flight birds from up north are still not here, so unfortunately they were few and far between. Fortunately, the grouse on the other hand finally decided to show themselves, as we moved 15 our first day, 12 the second, and around 10 or so on the last day. Yukon was hunting with another setter that my brother owns, he is 5
now. On two different occasions, Yukon actually backed my brothers dog which was the most amazing thing I have ever witnessed!!! I have seen this before, but not from a 10 month old puppy...I killed three grouse over his points, which he is holding for the most part, although he could hold a little stronger." From Yukon's Owner 10/27/2009
Yukon: Sable x Zak Jan. 24, 2009
Cruise: Zoe and Zak pup 03/31/2007
Cruise Retrieving His Pheasant/
Iowa Hunt Fall 2009
Cruise On Point
Ruger Backing Cruise
Ruger: Reba x Zak 02/03/2008
"95% of the Birds were shot over points with honors and backs."
Michele
2009 Iowa Hunt Photos Courtesy of Michele MacMaster, Cruise's owner.